Ultrasound images of anomalies of the fetal heart

Contents of this page

Congenital anomalies of the fetal heart

There is a ventricular septal defect involving the upper part of the septum.A large atrial septal defect (ASD) is also seen in these ultrasound images.

AVSD is also known as endocardial cushion defect or AV canal defect. It is caused by poor or faulty development of the endocardial cushion. These fetuses usually have other associated cardiac anomalies. The above images reveal large defects in the atrial and ventricular septae with a single large Atrio-ventricular valve replacing the mitral and tricuspid valves. In fact the the ASD is so large, that it appears like a single large atrium. Images courtesy of Dr. Latha Natrajan, Bangalore, India.

Reference: http://www.centrus.com.br/DiplomaFMF/SeriesFMF/18-23-weeks/chapter-04/heart/heartfmf-complete.html (free article with video clips and images)... rated (by us) as excellent.

Sonography of this 36 weeks old fetus revealed a large echogenic mass in close relation to the exterior of the fetal left ventricle, within the pericardial cavity.. A small pericardial effusion is also present. These ultrasound images suggest a solid, non-calcific mass of the pericardium. Possibilities include rhabdomyoma, teratoma and hemangioma. Rhabdomyomas are the commonest pericardial tumours and account for almost 75 % of cardiac masses. Teratomas can be either cystic or solid. Image courtesy of Dr. Prathima Radhakrishnan, Bangalore, India.

This is a 4.2 MB video file in GIF format. It might take some time to download. The aorta and the pulmonary trunk are seen mostly arising from the right ventricle. This condition is difficult to distinguish from Fallot's tetralogy and Transposition of the great arteries (TGA). Video courtesy of Dr. Latha Natrajan, Bangalore, India.

a) perimebranous b) inlet c) trabecular d) outlet. This classification is based on the location of the defect. Images courtesy of Gunjan Puri, MD, India.

There is also a bilateral jugular lymphatic sac observed in this fetus.

The fetal heart lies entirely outside the confines of the thoracic cage.

Case 1 does resemble an umbilical hernia from the ultrasound images on top. However the Color Doppler image of case 1 clinches the diagnosis of ectopia cordis. This was a early 2nd trimester fetus. Case-1 ultrasound images are courtesy of Dr. Dilraj Gandhi, India. This fetus also shows increased Nuchal thickness.Case-2 shows ectopia cordis with heart partially ouside the thoracic cage.

The ultrasound video of this case can be viewed at this link http://cochinblogs.blogspot.com/2009/04/ultrasound-video-of-ectopia-cordis.html.

This ultrasound image was taken by Joe Antony, MD,India.

Reference:http://www.thefetus.net/page.php?id=45 ( you can read more at this link)

All three above ultrasound images show echogenic foci in the left ventricle of the fetal heart (3 different cases). The foci are seen in relation to the the chordae tendinae and papillary muscles of the mitral valve leaflets . The overwhelming majority of EIF are seen in the left ventricle and are solitary. The echogenicity of these foci is about the same as that of bone.  Echogenic intracardiac foci (EIF) are often seen in Asian fetuses and are usually insignificant. However a small percentage of such fetuses may show associated fetal anomalies and chromosomal anomalies (aneuploidy). You may view a ultrasound video of the EIF in case-1 at:  http://ultrasound-images.blogspot.com/

The ultrasound video above shows two EIF in the fetal left ventricle at 20 weeks.

Multiple EIF are associated with a bad fetal prognosis, like the presence of anomalies and preterm or IUGR and fetal demise.

This 34 week old fetus shows what is called a relatively milder form of tricuspid dysplasia; see the ultrasound and color Doppler images of the fetal heart above. We can see the normal flow across the tricuspid valves as well as the bicuspid valves ruling serious functional problems with this fetal heart. The 3 vessels view also supports this diagnosis of mild tricuspid dysplasia- the normal size of the pulmonary artery supports this diagnosis. The only positive finding in this case is the marked thickening of the tricuspid valve leaflets.

The video of this case of tricuspid dysplasia can be viewed below:

This is a good example of hypoplastic left heart. The main ultrasound findings in this case are a small left ventricle and small left atrium. In addition, the mitral valve is hypoplastic, and hence is barely visualised. In addition, note that the Fetal echocardiogram shows a large and dilated right atrium and right ventricle. The left ventricle is barely visualised and is seen as a small remnant to the extreme left of the fatal heart. The ultrasound video and the ultrasound images above, further confirm that the Fetal ascending aorta and the Fetal aortic valve are small and atretic. Thus, these ultrasound images show a classic picture of hypoplasia of the Fetal left heart, also known as hypoplastic left heart syndrome.

This second trimester fetus shows (see ultrasound images above) an ectopia cordis with gastroschisis. here the Fetal heart is seen lying well outside the confines of the thoracic wall, with an anterior chest wall defect. The bowel loops are seen freely floating within the amniotic fluid without the covering membrane. This is the typical appearance of gastroschisis. In addition there were also features to suggest disruption of the distal sternumas well as part of fetal diaphragm and also the diaphragmatic pericardium. This group of five ultrasound findings constitute what is known as the pentalogy of Cantrell. These ultrasound images of pentalogy of Cantrell are courtesy of Dr. Durr-e- Sabih, FRCP, Pakistan.

2)   sonography of pentalogy of Cantrell

Yet another case of pentalogy of Cantrell (images and ultrasound video are courtesy of Harpreet Kehal, MD). Here, we can appreciate the massive ectopia cordis with almost the entire heart lying outside the thoracic cage, anteriorly with a large omphalocele (containing fetal liver and bowel) also visible. In addition, there also does appear to be a large defect in the diaphragmatic pericardium, the anterior half of the diaphragm as well as the distal sternum. However, these (latter) findings can only be confirmed on autopsy. The prognosis in such major anomalies, like pentalogy of Cantrell is very poor and termination of the pregnancy is possibly the best option, due to the high mortality, even with best medical and surgical care. Ultrasound video of this case is shown below:

These ultrasound images of pericardial effusion in fetus are courtesy of Dr. Durr-e-Sabih, FRCP.

4. The ascending aorta overriding the ventricular septal defect and both ventricles.

There is a frequent association with a chromosome 22q deletion in this syndrome.

3. Journal of ultrasound in medicine article on absent pulmonary valve syndrome in fetus

This late second trimester fetus shows a spherical dilatation of the proximal descending aorta near its junction with the fetal arch of aorta.This abnormal dilation of the fetal aorta is characteristic of aneurysm of the aorta. These ultrasound and colour Doppler images of fetal aortic aneurysm are courtesy of

Firoz Bhuvar, MD. fetal aortic aneurysm is a very rare entity and is often associated with various syndromes which involve connective tissue disorders such as Marfans syndrome or Ehler-Danlos syndrome. among the principal differential diagnosis in such a case, are coarcation of the aorta posts stenotic dilation or more often due to kinking of the fetal aorta. These ultrasound images however, did not show any kinking and hence our diagnosis is confirmed.

These ultrasound images show a three vessel view of the fetal heart. Can you spot the anomaly in this case? These Fetal echocardiography images show the superior vena cava, the aortic arch, and the pulmonary trunk with the ductus arteriosus proceeding from it. In this case, the Fetal aortic arch is located to the right of the trachea ( shown by the arrow) and also note that the confluence of the aortic arch and the ductus arteriosus is not V shaped ( as is the case in the normal left sided aortic arch) but U- shaped as in this case. All these ultrasound findings point to the fact that this is a normal anatomical variant called the right aortic arch. The right aortic arch is merely located to the right of the trachea and hence receives this name. Ultrasound images of right aortic arch, courtesy of Firoz Bhuvar, MD.

coarctation of aorta in fetus

in this second trimester foetus, the following ultrasound findings are present (see ultrasound images above):

2. There is a large ventricular septal defect or VSD in this Fetal heart.

3. The Fetal aorta appears smaller in calibre than the Fetal pulmonary trunk and the ductus arteriosus.

4. The sagittal section ultrasound image of the Fetal thoracic aorta and the arch  of aorta shows marked narrowing of the entire arch of aorta till it's junction with the descending thoracic aorta.

These ultrasound images of tubular hypoplasia, (coarctation of the aorta) are courtesy of Firoz Bhuvar, MD.

In addition, another Fetal cardiac anomaly noted in these Fetal echo- images above is that the main pulmonary artery or pulmonary trunk is narrower than the Fetal ascending aorta. This is due to mild pulmonary stenosis which is common in cases of double outlet right ventricle (DORV). the colour Doppler flow image of the pulmonary trunk confirms this fact by the lack of any aliasing or turbulence in the flow of this vessel. These Fetal echo images and video of DORV with a AVSD with mild pulmonary stenosis are courtesy of Firoz Bhuvar, MD.

This 2nd trimester fetus  shows DORV or double outlet right ventricle with a sub-pulmonary VSD or ventricular septal defect. The orifice of fetal aorta is placed away from the left ventricle and hence has poor prognosis compared to a sub aortic VSD. This anomaly is a variant of DORV and called Taussig Bing variant. STIC ultrasound images of DORV with Taussig Bing anomaly (STIC or 4D color Doppler ultrasound of fetal heart) are courtesy of Dr. Firoz Bhuvar, MD.

This third trimester fetus shows generalised or global enlargement of the heart including both fetal ventricles as well as the fetal atria. The fetal echocardiography video also shows both tricuspid as well as mitral regurgitation although both appear to be mild in nature. These ultrasound findings suggest this to be a case of dilated cardiomyopathy. Dilated cardiomyopathy is usually the result of intrauterine infections such as toxoplasmosis and cytomegalovirus infections. In this patient, there was a history of analgesic intake by the mother during the pregnancy which may have resulted in the pathology in this fetal heart. Dilated cardiomyopathy typically reveals dilation of one or more chambers of the heart with usually associated mild or severe mitral and/ or tricuspid regurgitation. Conservative treatment is usually sufficient to control or even reverse all these ultrasound findings. Another finding which may be present in cases of dilated cardiomyopathy is echogenic intracardiac foci. this ultrasound video and images of dilated cardiomyopathy are courtesy of Firoz Bhuvar, MD.

This is a relatively common ultrasound finding during fetal ultrasound with an incidence of almost 1.5% of the entire population. One notable point to be remembered is that there is a high incidence of trisomy 21 associated with aberrant right subclavian artery. If other cardiac anomalies are seen, there is a danger of other chromosomal aneuploidies. 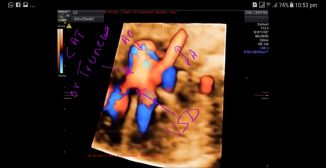 = size of VSD defect is less than 3mm

= small apical VSD is known to close spontaenously during infancy

= hence good prognosis in this case

= the VSD defect in the fetal heart itself is poorly seen on B-mode ultrasound. However, STIC 4D ultrasound shows (see the video above) flow across the miniscule defect in the ventricular septum near the apex.

= apical VSD are comparatively rare and it is more common in the middle muscular septum or membranous region of the ventricular septum.

References: STIC sonography of VSD and its prognosis

=diagnostic point: to be labelled atrial septal aneurysm- the membrane should bulge more than 50 % of the width of the left atrium

= fetal left atrium is smaller than normal due to obstruction to flow (by atrial septal aneurysm) from Rt. atrium across foramen ovale.

= usually not associated with other cardiac anomalies

= atrial septal aneurysm usually disappears after boirth due to closure of the foramen ovale.

= the fetal ultrasound echo video of atrial septal aneurysm and images are courtesy of Dr. Tamuna G (edits by me, Dr. Joe A)